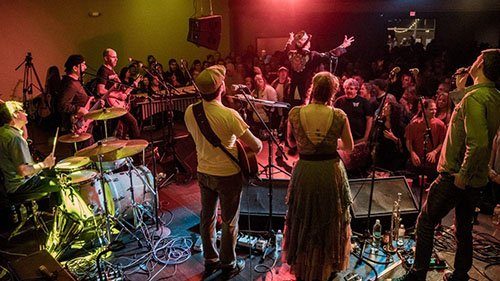 At a typical orchestra performance musicians take the stage and begin to warm up. Notes upon notes come out of every instrument as their fingers get ready for a night of playing. A slow hush rushes over the well-dressed audience gathered in anticipation. The conductor comes to the stage and gets ready to use his arms, hands and baton to make the music come together in harmony.

A similar series of events took place at Putnam Den in Saratoga Springs on Saturday night, but it wasn’t your typical orchestra. The conductor Matt Butler didn’t have a baton and his Everyone Orchestra not only includes the players on stage, but the audience is just as much a part of the performance as well.

Butler has been doing this for over 15 years and the lineups are never constant. This run was three shows with the same band and which wrapped up in Saratoga. The crowd filled the venue to the brim and were constantly game for whatever Butler wanted them to do. From jumping, to twirling, to singing, to clapping — the audience was in step from the get go. A few times Butler also turned to show the audience where the “song” would be going to next to get their opinion, and it was always met with an approving yelp.

The idea behind Everyone Orchestra is that nothing is planned ahead of time. The whole night is a spur of the moment affair with the musicians following whatever Butler may tell them to do. At the start of “songs” Butler would instruct one of the members to start riffing, or he would look to the audience with a white board with writing on it to seek their approval. Each “song” would go through sections, like an orchestral piece, giving each participant a chance to solo and shine. Butler never stopped moving on stage, bouncing up and down, waving his hands to signal members of the band, turning around to get the audience to sing. It was a feat of endurance watching Butler work through both sets.

Holding down the low end all night was bassist Eric Gould. He never had a solo or was told to start a jam, but he was the cornerstone that held the entire evening together. Percussionist Jim Loughlin and drummer Vinnie Amico of moe. kept the music moving along while following Butler’s directives. Vocal duties went to mostly the duo of Ryan Montbleau and Hayley Jane, who opened the show with their new band Yes Darling. Their opening set was tremendous, and the stories the two of them sang about during the set were perfect. Their chemistry is through the roof and Yes Darling will hopefully continue strong for many years to come. With EO, Ryan, Hayley and Mike “Maz” Maher improvised lyrics as Butler cheered them on and mouthed suggestions to them.

The last piece of this version of the band was moe. guitarist Al Schnier. Butler constantly played Ryan and Al off one another and this dynamic was beautiful to watch. Quite possibly my favorite concert moment of the second half of the year was Butler coaxing a guitar duel between the two near the end of the first set on Saturday night. The amount of fun had watching the crowd go wild as the two pushed each other while turning to Butler for guidance is what concerts are made for. Those moments of everyone in the building flying by the seat of their pants is what Everyone Orchestra is really about.

The night saw plenty of musical ideas explored, but it was one idea that summed up the whole night. Matt spoke about playing during the election and it feeling like a funeral, touching on the importance of community and helping one another when you can. The last “song” of the night, which repeated the words “incite love” was a fitting ending to the show. Hayley steered the ensemble through the improvised slow-building ballad and the entire band latched onto it. To have such a moving piece come out of thin air brought many tears to the eyes of the audience. During the last “song” Matt revealed a smile, clearly feeling the special moment happening as well. When the conductor is happy with what is going on, everyone can be happy too. Everyone Orchestra is back out next weekend with a completely different band, but the end result should be the same.